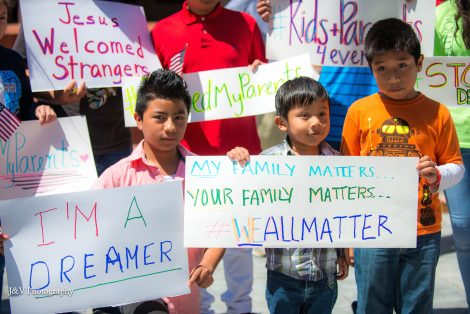 A Statement From Pastor Jeff on behalf of our Church, Sept. 6, 2017

Another week and another vulnerable population group under attack.  This week it’s Dreamers – children whose parents brought them to America when they were young – on average age 6.  These kids have grown up among us and played no role in their family’s decision to come to America.

A program that protected Dreamers from deportation as long as they applied and met standards for character and productivity was rescinded yesterday by the President.   As a result, deportations could begin in 6 months, ultimately impact almost a million kids, unless Congress passes protective legislation or the President changes his mind.

Polls show 80% of Americans oppose revocation of protections for Dreamers.   If you share that view, please contact your congressional representatives to ask them to pass Dreamer legislation and contact the White House to ask them to rethink their approach.  Contact information can be found at CommonCause.org.

LifeJourney strives to be a nonpartisan church.  We are politically diverse.  But we stand united in advocating protection of vulnerable populations.  Last year, based on extensive surveying of our congregation, we identified three areas of strong congregational consensus where we focus our justice actions and advocacy.  We adamantly oppose discrimination against LGBT people, people of color, and immigrants.  As Jesus said, “Whatever you do to the most vulnerable among you, you do to me.”  Matthew 25:40.